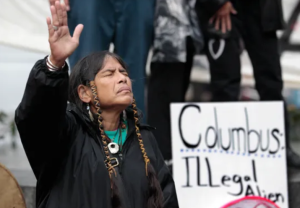 Of course it’s true that Columbus was an illegal immigrant. Science has an airtight record of people migrating to this hemisphere. Migrating is crucial to the distinction – it means they came to a land that had no government to apply for citizenship. So, tribes formed their own nations. Anyone who enters someone else’s nation is either a visitor or, if they won’t leave and won’t join the nation that they are a guest of, they become an illegal immigrant. An invader. For Columbus, the latter might best describe him. He came, he stole, he brought home shiny stuff and invaders were sent to get the rest.

Trump’s worst nightmare would be Columbus arriving today, with his caravan, declaring that he just discovered us and goes on to undermine our country.

So, the day he landed should logically be a day of remembrance: Remembrance of the destruction of thriving nations and the victims in left in his wake. But a celebration of the 1492 occasion seems somewhat bizarre. Especially since he discovered nothing new, he was headed somewhere else, and he was a foreigner. Hey, we don’t have a day in honor of Hitler or Hirohito just because they put our scientists into high gear to create an atomic bomb.

Let’s take Columbus Day off our list of half-price-day-worthy federal holidays. There are many things that Americans of Italian descent can be prouder of: a day honoring Anthony Adduce, who brought us the cardiac pacemaker that most likely saved the life of someone you love. Antonio Meucci, who Congress recognized as the inventor of the telephone. Geraldine Ferraro, the first nominated female running mate in U.S. history. Nancy Pelosi, who hasn’t died yet, but for a while, there, made us wonder. And, most of all, a celebration of the rich culture and hard-working commitment that millions of Italian Americans brought to this country.

None deserve a parade or provide an excuse for the banks to close. But Columbus does?

« But He Looked So Wholesome!
5 More Reasons to Hate the Phone Company »