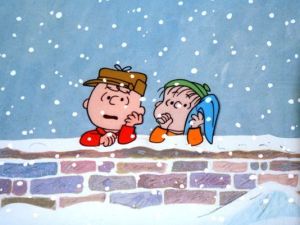 We all stop believing in Santa. Then what?

Shirley Temple said, “I stopped believing in Santa Claus when I was six. Mother took me to see him in a department store and he asked for my autograph.”

Other kids in America will start to question Santa’s existence in droves when the Great Christmas Tree Shortage of 2018 forces them to make-do with stockings covered in glitter-glue that once spelled out their names.

And if they are lucky enough to score a tree this year, they’ll be even more disappointed by the Great Christmas Tree Bug Epidemic of 2018. They’ll experience doubt in all things Christmas while they spray Raid on winged angels, candy canes and Aunt Charlotte’s knitted troll doll ornaments.

For any child, finding out there’s no Santa Clause triggers three stages of grief. First: Shame. “The older kids have been laughing behind my back.” Second: Disbelief. “How could every authority figure in my life be perpetuating a conspiracy like this? Mom and dad, the post office and NORAD? You don’t make this kind of stuff up!” Third: Vindication. “I knew something smelled fishy. I was just about to solve it.”

Though psychologists have mixed opinions about the pros and cons of lying to children about Santa, it seems self-evident that the grief syndrome continues, year after year, but with some grown-up twists.

Adults suffer a different kind of Shame. Black Friday fights at Walmart, for example, or the Senate fighting to fund with our dollars “the grinch wall” before the 116th congress comes in. “That’s one of the many things we’ve got to wrap up here at the end of the year,” said Mitch McConnell.

And a different kind of Disbelief. How can crime rates possibly go up while we’re all working really hard to be nice? How can the first Monday in January be known among attorneys as “Divorce Day” when Christmas is when we try really hard to get along?

The problem stage is Vindication. Adults don’t get any. Maybe because we gave up on one crucial part of the Santa myth: Wishes. Wishes that we’d get the Tickle Me Elmo, that Aunt Charlotte gave up knitting, and most importantly, wishing that Mr. Bean won’t release a movie that our friends want to see on Christmas Eve. To turn that into vindication, it takes action.

So, this year put on your What Would Santa Do (WWSD) wristbands and get down to work.

In the tumultuous year we’re facing, let’s wish that Christians notice the generosity of Muslims and Buddhists and the contributions of immigrants to our nation. Let’s hope we can get out of the tangled web of Twitter diplomacy before the world blows up. That instead of trying to bring slave-wage jobs back from China, we get funding for education that will stop hospitals and Google from having to import labor — for high-ticket jobs Americans would be willing to do if they could afford higher education. We can wish that America stops addressing the gun problem with thoughts and prayer and gives policy and change a chance. And let’s wish that we don’t leave all our children, the ones we lied to in the first place, in a world where the air is unbreathable, the land is under water, and there are only a couple bug-infested Christmas trees left.

Santa can’t make it happen, but you can still find some things to wish for and then stuff your own big red bag with action plans. Pick just one or two issues close to your heart, and then do something. Get involved with local government now and then or write to politicians who exhibit insanity. Demonstrate. Volunteer. Donate money if you can. Knock on doors. Bring a homeless family some Christmas dinner leftovers. Or just take a couple weeks off from binge-watching or believing that Internet memes influence the world around you in a concrete way.  You’ll feel vindicated — like the little kid in you who smelled something fishy and were just about to solve it — because this time you really will.