Ready for “Laugh and Get Rich Day”? 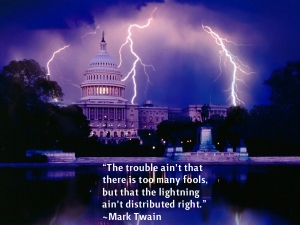 The Budget Showdown: Are We Waiting for “Laugh and Get Rich Day”?

What was all that hoopla about CHIP v. DACA? And why has Mitch McConnell been so fixated on February 8th as the deadline to hammer out a budget? Is there some significance?

As it happens, the 8th is “Laugh and Get Rich Day.” And it seems like a fitting day for a new budget when the only major legislation to creep out of Congress in the last twelve months was a new tax bill that makes middle income Americans think they are richer and lets corporations know for damn sure that they are richer. Now, this may be speculation but it’s hard to conceive that corporations didn’t have some kind of influence on that tax bill, directly or indirectly, since they made out pretty well with it. So why not give Wall St. until “Laugh and Get Rich Day” to figure out what to do with the whole federal budget?

There’s the rub. In this case, stalling meant fabricating red herrings, so CHIP and DACA were dragged out, making this soap opera all about buzzwords like immigration and kids and entitlement money. Those are good covers that might convince constituents in November that the shutdown (if they remember there was one) wasn’t a smokescreen, that it wasn’t a cover for idiocy or a simple Hail Mary Pass to corporations. Rather, they can claim, it was genuine proof of compassionate convictions.

But the red herring wasn’t necessary. It was just another bad bet from a government that is willing to stack the odds against itself. As it happens, corporations didn’t really care about the budget. Shutdowns cost a fortune. And anyone with Google and a working calculator could figure out that CHIP and DACA go together: one costs money, the other makes enough money to cover that cost. It’s like peanut butter and chocolate. Two great ideas that are even greater together. Essentially, there is nothing to debate and both programs should be in the final budget without discussion.

The pseudo drama we had to put up with feels like a page from the script of the movie “Dave,” in which Kevin Kline plays a lookalike of the US president, who sits in for the real one, who in turn is presciently and secretly braindead. Dave, a financially incompetent but a heart-of-gold owner of a temp agency, brings in his trusted freelance accountant, played by Charles Grodin, to take a look at the federal budget and help find $650 million — enough to rescue a federal program for homeless kids.

Grodin’s character looks at the federal budget and says, “I gotta tell ya, Dave. I’ve been going over this a bunch of times and a lot of this stuff just doesn’t add up. I think they made this more complicated than it has to be.”

In movie time, it took an all-nighter and some bratwurst for the two characters to make it less complicated and find money in the budget for the homeless kids.

The CHIP v. DACA issue could have been solved in less time. Reputable reports that anyone can find online inform us that the $1.3 million undocumented immigrants now enrolled or immediately eligible for DACA contribute an estimated $2 billion a year in state and local taxes. Add to that $13 billion they put into Social Security – which they may never see if they’re drop kicked over Trump’s wall before retirement.

So, America makes $15 billion a year from the DACA program even if we keep the program in legal limbo. That figure doesn’t even include other income sources and savings for the government that are harder to nail down but intuitively add up: DACA enrollees pay property tax, whether directly or through their landlord; they’re not eligible for college funding in 7 states; they pay sales tax in most states, and they can’t get Medicaid or Obamacare. All these kids do is save us money and give us money – and we’re so upset about that we have to close the government.

Look at the other side. DACA, if not extended or shaped into law with a pathway to citizenship, suddenly becomes an expense. The cost of deportation for the 800,000 DACA enrollees and estimated 11,000,000 tax paying, undocumented workers without a path to citizenship would cost $10,800 per person, or $13 billion.

Subtotal time: Now we’re up to DACA and a path to citizenship producing an income of $15 billion and a savings of $13 billion. That’s a $28 billion net asset.  (Wondering what that means long-term? Some sources report a deportation price tag of $438 billion and a reduction of the GDP by $4.7 trillion over 10 years.)

Now for CHIP. The cost of at least trying to keep healthy some 8.9 million children enrolled in CHIP hovers around $15 and $17 billion each year. That part is simple. It cost money.

Mix all this together. DACA is equal to $28 billion in your checking and savings account. CHIP is your $17 billion medical bill. You still have $11 billion in your piggy bank after you pay the medical bill, and that’s enough to pay for the first few inches of Trump’s wall.

We have major global issues that threaten economies and human survival. We’ve got more to debate in this country than getting angry about having a surplus because we’re helping out some kids. And since our red button is the biggest, we have a responsibility not to act like children on the world stage.

Does anyone remember why the government shut down in 2013? It happened because Republicans didn’t want a healthcare mandate and therefore tried to defund Obamacare. And in 2018? Because Republicans insisted on enforcing an expensive healthcare program while getting rid of its free source of funding. Something more is at play, here, but what?

While we’re speaking of healthcare, did you know that DACA enrollees are proportionately among America’s largest segment of registered organ donors? It’s probably because they are viewing America’s future with a long lens. Congress should give that a try between now and “Laugh and Get Rich Day.”