Prelude to the Next Clinton/Trump Debate 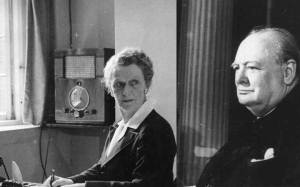 Maybe this will summarize the October 9th Debate:

Lady Astor:  Winston, if I were your wife I’d put poison in your coffee.

Winston Churchill:  Madam, if I were your husband I’d drink it.

The two were reputed for a series of sarcastic dialogues whose lines were ping-ponged on the halls of Westminster Palace to the delight of the many accidental witnesses that obviously couldn’t refrain a smile when hearing such virulent interlocutions like the following:

Nancy Astor: Winston, you are drunk.

Winston Churchill: And you, madam, are ugly. But I shall be sober in the morning!

Any other lady would’ve slapped him, offended by this type of rudeness which seemed as if taken from Oscar Wilde’s plays, but not our Nancy, no, for she was an adept of intelligent revenge and on numerous times had the chance to retort smartly a mocking proposition to equal the score.

Thus, when the stout Winston attempted to both tease and ridicule her by stating that “having a woman in Parliament is like having one intrude” on him “in the bathroom”, she serenely replied: “You’re not handsome enough to have such fears”, provoking general dissimulated laughter amongst the stiff diplomats, we can imagine, to her satisfaction.

Also, at his impolite question about what disguise  he should wear so that nobody could recognize him at the Astor’s “stupid” masquerade ball, Nancy ironically responded using rhetoric: “Why don’t you come sober, Prime Minister?”

Yet by far my favorite is the immortal exchange of witty words which Consuelo, Duchess of Malborough, registers in her “the Glitter and the Gold” autobiography: “Lady Astor and Winston were actuaded by a strong antipathy one for the other, so much so that one never invited them together, dreading the inevitable explosion bound to occur. It was therefore unfortunate than on one of her visits to Blenheim, when my son was host, Churchill should have chosen to appear. The expected result of their encounter was not long in coming; after a heated argument on some trivial matter Nancy, with a fervor whose sincerity could not be doubted, shouted, ‘If I were you wife I woul poison your coffee!’ Whereupon Winston with equal heat and sincerity answered ‘And if I were your husband I would drink it!’

WTF?
#repost • @intrsoul At this point, the @senategop is little more than a shrewdness of GUANO APES flinging their sh!t at Dems and any sort of progress they attempt.
🎂
No motivation to post this other than it hits the spot today.
🤔 Has being politically correct jumped the shark?
Sent in by a friend. #lesterandcharlie #williamshatner #planetoftheapes #jeffbezos