Pull Up A Chair, Kids 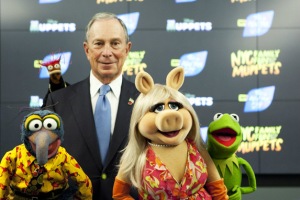 It seems we can’t get through a decade without at least once having former New York City mayor Michael Bloomberg remind us that, as a billionaire, he’s as entitled as anyone to buy the presidency of the United States.

And here he is again, declaring that he’s two thinks from declaring candidacy and riding to America’s rescue. We admit that it’s a bit more complicated this time around — what with Trump or Cruz barreling toward the GOP nom and Bernie bearing down on Hillary hard. It’s possible, though difficult, to imagine a Cruz vs. Sanders face-off that leaves non-primary voters so freaked out it opens a teeny tiny window for a third-party candidate. But… Bloomberg?

Pundits and scholars have already weighed in about how there’s no way for Bloomberg to jump in and actually win. A few have said how it’s Bloomberg’s positions on guns and Big Gulps that will stop him. But most have pointed out how it’s simply mathematical: Electoral College and pluralities and a GOP-controlled House and yada yada yada.

We don’t think Bloomberg actually wants to run; we think he’s in this for the attention. (Money, apparently, is no substitute to hearing your name tossed around the Sunday morning talk shows.)  We don’t really see any harm in it if it gets talking heads to talk about something besides Donald Trump for ten or fifteen minutes. And, besides, if this goes anywhere, we’re hoping to reconnect with some very old friends we haven’t heard from in a long time.

Pull up a chair, kids, and let us tell you about the time your intrepid reporters Lester & Charlie were tangled in a highly secretive, not-yet-announced campaign of a candidate a lot like Bloomberg. Our job responsibility was to monitor chat room chatter about how game-changing this candidate, if he ever decided to run, could be. The stealth candidate’s job was to deny everything. Which only got the 24-hour news cycle more jazzed up to talk about him. A circumstance that, according to our job responsibility list, instructed us to go back to the message boards to fuel the fire.

But more interesting than the TV chatter were the thoughts and hopes of the lonely people all over America who actually wrote to our unannounced candidate to tell him to run. Not for the hills. To run for president. These were people who felt completely abandoned by the political process. Conspiracy theorists like the one who was convinced that our country was so doped up on estrogen that “ALL OUR BOYS ARE GROWING BREASTS!” And a frustrated small-town activists in Texas who longed for a Nanny-State Executive to get their neighbors to clean up her neighbor’s damn lawn. A proud supporter who announced she’d be thrilled to wear a bumper sticker for our guy — if only she could figure out how to spell his name.

And it didn’t stop there.

There was the guy who wrote to say that, as a Jew, our guy was pretty much unelectable — unless he were to team up with a certain Austrian former governor whose father was affiliated with the Nazi party. You know, for balance. Then there was the pro-life, Roman Catholic, fiscally conservative homosexual who had almost despaired of ever finding “that special candidate” before he heard about our guy. And another who thought the perfect team would be our guy at the top of the ticket along with… Bill Cosby.

That was eight years ago. Do you know what happened to those lonely, abandoned, alienated voters who felt so marginalized then? They multiplied like rabbits. Now, in 2016, they are the stars of the electorate. These are the people who don’t care what Trump says — as long as he channels their anger. They’re thrilled to hear that everybody in Washington hates Ted Cruz. They don’t care that Sarah Palin makes no sense — in fact they love it. Heck, they’d even still be loving poor Ben Carson if only someone had given him a cup of coffee to keep him awake for the debates.

Watching the news now, and especially watching the meteoric rise of Trump, we have to suspect those lonely people who wrote to us long ago were all on to something. A viable candidate needs is a billion dollars and a penchant for psychopathy.

And that got us thinking: If he runs, maybe our guy really should get on a ticket with Cosby.

While you’re here, check out our new books on Amazon.

💯 Not to bring any additional attention to the man in orange, but this is kind of funny.
“There is a cult of ignorance in the United States, and there has always been. The strain of anti-intellectualism has been a constant thread winding its way through our political and cultural life, nurtured by the false notion that democracy means that 'my ignorance is just as good as your knowledge.”
#repost • @inallitsforms
🍻 Paul Lynde Marathon Pt 5!
😵‍💫 Anybody seen where I left the Geritol?
🥱now there’s a surprise.