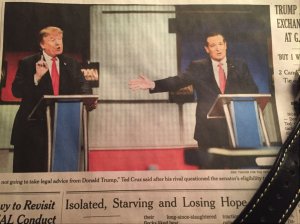 The Iowa Caucus spectacle started with snarky humor and, by Monday night, will probably end in horror (if it hasn’t already).  And the whole thing could have been prevented.

It started on a high comedy note. While the candidates were getting the lay of the cornfields, the UK Parliament was devoting three full hours to Donald Trump and tossing around words like “Muslim hater,” “repugnant,” “hypocrisy,” “buffoon,” “joke,” “idiot,” “fool,” “crazy,” – and apologizing for any genetic associations he has with Scotland. So you knew that any minute, Trump was about to get Palin’s endorsement.

And sure enough, by Tuesday, Sarah Palin had stored up enough kitchen magnet poetry kits to do a whole endorsement speech for Trump.

That’s when a dark shroud started to settle on Iowa. Suddenly, what was supposed to be funny became sad. Two egomaniacal reality TV stars were setting aside their differences and kissing ass in a blatant attempt to have the evening’s highest TV market share. It felt like humor itself had become another Trump Rally evictee.

Trying to take some attention away from that, and maybe inject some laughs back into the equation, Governor Christie declared that kids in public schools should be able to eat anything they want, just like he does, and they should smoke if they want. Then, to kiss some NRA ass in an over-the-top, cynical way, he vetoed a New Jersey bill that was going to make selling guns to carjackers, gang members, racketeers and terrorists illegal. So, now it’s legal to sell guns to people with clear histories of trying to kill you. That didn’t exactly bring humor back the Iowa Caucuses.

A few other candidates tried to inject some humor. Jeb Bush mailed out self-playing video cards that run a “life of Jeb Bush documentary” for 15 long minutes when you take one out of its envelope. Now, bless him, he tried. But we saw the video. This just didn’t bring back the humor.

The towel finally had to be thrown into the Iowa Caucus ring and it came in the form of a real tragedy. A campaign volunteer for the Carson campaign, Braden Joplin, was driving a van through Iowa with three Carson staffers when the van flipped on some ice and got hit by another vehicle. Mr. Joplin, the Carson campaign’s volunteer, died.

This is one of the saddest pieces of presidential political campaign news we can remember. Yes, campaign staffers have died while doing their jobs, friends of candidates have died while their friends were running a campaign and Horace Greely died after he won his party’s nomination in the election of 1872.

But to die for the Carson Campaign? And not even get paid for it? How do you die for a campaign that’s already dead? Compared to the Carson campaign, Terry Schiavo was practically doing tap dance routines in that Florida hospital.

If just for the safety and dignity of campaign volunteers, we think that all campaigns must willingly cease operations when they are dead. It’s not hard to tell which ones are – you just look at it. We call on all campaigns that will never make it through the primaries to just stop, stop right now. Stop before Monday. Jim, Jeb, Mike, Carly, Chris – go home. If someone wants you for the #2 spot, they’ll call. And, meanwhile, you might just save a life.

While you’re here, check out our new books on Amazon.

😵‍💫
😳 You have to love this part.
🍻 And, really, no one else wants to go.
💯 Not to bring any additional attention to the man in orange, but this is kind of funny.
“There is a cult of ignorance in the United States, and there has always been. The strain of anti-intellectualism has been a constant thread winding its way through our political and cultural life, nurtured by the false notion that democracy means that 'my ignorance is just as good as your knowledge.”
#repost • @inallitsforms