The Week in Politics: When Pigs Fly

Pigs are flying and lost souls in Hell are buying snowblowers and it’s all because we learned that self-identified Tea Partiers have an aptitude for science.

Yes, that’s right, Yale professor and researcher Daniel M. Kahan concluded this week that Tea Partiers have a better comprehension of science than that of their right-wing counterparts. Somehow, this graph proves it:

Hindsight is, of course, 20/20. So let’s look back at what some Tea Baggers on the House Committee on Science and Technology have said recently:

“It seems to be, first of all, from what I understand from doctors, it’s really rare. If it’s a legitimate rape, the female body has ways to try to shut the whole thing down.”

“All that stuff I was taught about evolution and embryology and the Big Bang Theory, all that is lies straight from the pit of Hell.”

“It could be dinosaur flatulence. Who knows?”

As we said, hindsight is 20/20. And, looking back at transcripts from the Science Committee through fresh lenses, we have to agree – these Tea Baggers really do have a better grasp of science than their Republican counterparts. 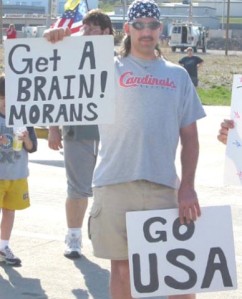 #repost • @intrsoul At this point, the @senategop is little more than a shrewdness of GUANO APES flinging their sh!t at Dems and any sort of progress they attempt.
🎂
No motivation to post this other than it hits the spot today.
🤔 Has being politically correct jumped the shark?
Sent in by a friend. #lesterandcharlie #williamshatner #planetoftheapes #jeffbezos
😤 While we're at it, can we legalize retroactive abortions for Texas politicians?