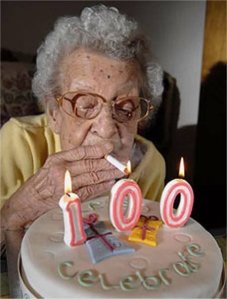 In the same way that there was a “5th Beatle”, Aunt Betty was the “3rd Lester & Charlie.” Not trying to say that Lester & Charlie are the Beatles, just that there’s driving forces behind teams who don’t get a lot of attention even though they deserve it. Aunt Betty is among them.

Regrettably, Aunt Betty passed away this this week. Which means that we’re all living in a world that isn’t quite as good as it was when the week started.

Like every other completely insane person you know, Betty was born to a Vaudeville magician known as the “Great Retlaw” and his wife, Laura Kyle, who was the great-granddaughter of John Ross. Ross was the Chief of the Cherokee Nation who bartered the horrible deal with President Andrew Jackson that resulted in the “Trail of Tears.”

And Betty knew tears. Because, in 1928, she was the oldest of four kids and had to become their surrogate mother due to all the death around her: Her mother died. The the world economy died. And, god forbid, so did Vaudeville.

Betty adapted, survived, and helped raise those siblings. Along the way, she developed a sensibility that could make a perfectly sunny day gloomy and a gloomy day sunny and full of adventure.

She became  “Aunt Betty” — the aunt who you called at the age of 7 when you wanted to run away from home, knowing in the back of your little head that she’d come over in a flash, help you pack some clothes and a toothbrush and then drive you in her death-wish Pinto to your favorite restaurant and convince you over dessert that life at home isn’t so bad after all. She’s the aunt you called when shit happened and you just needed to talk to someone who dealt with more shit than you. And while her words were sometimes hard to take, they were always wise.

it’s always easy to miss a person who is gone but had so much more to give. And, because we’re all selfish, it’s never easy to realize that, sometimes, a person has given enough and it’s time for them to have a little peace and little payback.

Aunt Betty, we hope that the little piece of the many hearts you’ve taken with you this week will even that score. We thank you, and we will love you forever.

“God hasn’t always been good to me, but She’s been a Hell of lot more patient than Bank of America.”
~Aunt Betty on Finance

“Why did I marry a Republican? I knew that an idiot’s problems would be vastly different from mine.”
~Aunt Betty on Marriage

“Never vote for a man who missed every opportunity God gave him to shut up.”
~Aunt Betty on Mitt Romney

“Never approach a bull from the front, a horse from the back or a priest.”
~Aunt Betty on Public Safety

“I became a feminist the day I realized that the people designing women’s shoes never had to walk in them.”
~Aunt Betty on Feminism

“If the right people were medicated, I wouldn’t have to be.”
~Aunt Betty. Period.

« While You Were Sleeping, the GOP Entered the 21st Century
This Week’s Video Vault Selection »