And Now for Something Really Amazing! 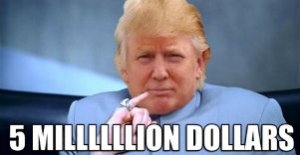 It’s October and it’s an election year! So before you pop a Xanax to prepare for all the five-year-olds in Dick Cheney masks knocking on your door and taking your candy, brace yourself for another American political tradition: the October Surprise! You know what that is: The game-changing announcement right before an election that makes you rethink who you’re going to vote for.

This week, two red-white-and-blue media whores did their patriotic duty and tried to serve up some scandals. On Wednesday, Donald Trump delivered some information that hard-hitting journalists everywhere hoped would “shake the entire fabric of the nation.” And what was it? Trump stunned the country with an offer to pay the charity of Obama’s choice a whopping $5 million if Obama released his college applications and school transcripts.

Hmm. Well, $5 million might change the fabric on Trump’s head, but not the nation. But fear not! Enter Gloria Allred, Trump’s counterpart – albeit a liberal woman with boring hair — who, like Trump, never met a photo op she didn’t like. Allred has a game-changer involving Mitt Romney. Brace yourself: she might have evidence that Mitt Romney lied in public. Heavens! That should come as a surprise only to people who didn’t watch any of the debates. And here we thought the only thing that lied better than Romney is the rug on Trump’s head.

Meh. Maybe they don’t make October Surprises like they used to. Time was when a bombshell dropped just before an election really meant something. Kissinger announcing “peace is at hand” in Vietnam. Reagan’s defense secretary being implicated in Iran-Contra. Schwarzenegger praising Hitler. (Really!)

Have we become jaded? Or did the October Surprise tradition just get off to a rocky start? Maybe we need to bring back Gracie Allen’s Surprise Party to meet our national expectations with slogans like, “I don’t know much about the Lend-Lease Bill, but if we owe it we should pay it.”

But before you give up on the Allreds, the Trumps, the Coulters or Mrs. and Miss Bachmann, the clown car still has a few miles left to travel this month – and a lot of lunatics out there have plenty of ways to make Halloween spooky!

Everybody wants to keep this exciting. So tell us: Is there still time for a game-changer? What last-minute bombshells do YOU see being launched at the November elections?

Struggling to make ends meet? Lester & Charlie can show you how to save tens of dollars on your next trip to the drug store!