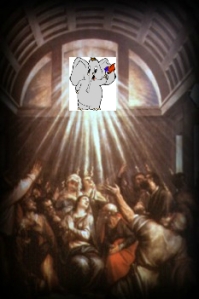 Even though nothing’s come out of Michele Bachmann’s mouth since California signed that bill designating “pray away the gay” as quackery, it’s nevertheless been quite a vocal week for crazy Republicans.  Perhaps Mitt Romney’s surprise performance at the first presidential debate has them feeling, well… invincible.

How else can you explain Georgia Congressman Paul Broun helpfully telling us dimwitted Neanderthals what any blind mole can see — namely that the earth is no more than 9,000 years old and that evolution, embryology and the Big Bang Theory are “lies straight from the pit of Hell.” Broun, a Doctor of Medicine (and, along with Todd “legitimate rape” Akin, a member of the House Science Committee — seriously, you can’t make these things up), also believes that his election to the U.S. House of Representatives in 2007 is directly attributable to Jesus Christ. Why, oh why, is it that no Republican has ever attributed his defeat to divine interference? Seems much more likely to us, but, then again, no one asked for our opinion, and, to be honest, Jesus hasn’t returned our calls.

Then there’s Jon Hubbard, Republican from Arkansas, currently running for Congress. This week, Hubbard told the Huffington Post that he didn’t have time to comment on statements made in a self-published book from 2009 in which he praises, of all things, slavery. “The institution of slavery that the black race has long believed to be an abomination upon its people may actually have been a blessing in disguise,” writes Hubbard in Letters to the Editor: Confessions of a Frustrated Conservative. “The blacks who could endure those conditions and circumstances would someday be rewarded with citizenship in the greatest nation ever established upon the face of the Earth.” Wow. It never occurred to us to ask why those uppity blacks weren’t more grateful. Thanks for pointing that out, Hubbard! The U.S. Supreme Court must wish it could call you as a witness when it hears an upcoming case on affirmative action!

Speaking of the Supreme Court, how could we leave out Justice Antonin Scalia, who, this week, announced to the American Enterprise Institute that some cases before the highest court in America don’t even need an argument — they’re no-brainers. “The death penalty? Give me a break. It’s easy,” said Scalia, dismissing any idea of impartiality. “Abortion? Absolutely easy. Nobody ever thought the Constitution prevented restrictions on abortion.” Scalia didn’t stop there. “Homosexual sodomy?” he said. “Come on. For 200 years, it was criminal in every state.” It was also punishable by death. Kinda makes you wonder why Scalia isn’t running for president of Iran.

What’s going on here?  We’ve suspected for a while that conservatives are going nuts, but something has empowered them to open their mouths and prove it. Are they simply emboldened by Romeny’s one good debate? Or have we missed something? One good debate (albeit won by a mannequin) can’t tell the whole story. So what do they know that we don’t know? What’s the secret news running through conservative circles that has them so jazzed up? What do YOU think?


Want to find out what people wrote in? Subscribe to the Lester & Charlie Newsletter!

Let Lester & Charlie show you how to get big business on YOUR side:

It’s not that they have a black skeleton for sale at Home Depot, it’s that it’s that only the white ones have good teeth.
#911
Via @inorganicwaste
While Eye-Gee decides how to punish us this week, let take a trip down memory lane: the first web pages by some household names.
With all due respect to the family, People Magazine has invented a new level of inane headlines.
🌸 We know and vetted them or we wouldn't ask this. So,