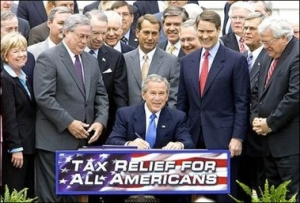 “It will be the end of the world as we know it if the federal government doesn’t reform its fiscal ways!” trumpets Rep. Jason Chaffetz, a Republican from the grand state of Utah, in a Op-ed for The Hill this week. He’s freaking out, as many conservatives are, over the size of the federal deficit. He comes armed with brazen solutions, but none of them, of course, involve raising taxes. When a conservative says he can fix huge budget problems without asking the super-rich to pitch in, our advice is to duck.

Chaffetz, the former Utah co-chairman of Michael Dukakis‘ ’88 campaign for president (and former spokesman for Nu Skin beauty products), converted to Republicanism after meeting Ronald Reagan in 1990. Apparently, a mere two years after Saint Reagan had left office, it was already possible to pretend that Reagan himself never raised taxes when he needed to. And, yes, this is the same Chaffetz who, last November, suggested fixing Social Security by raising the retirement age to 72. So you know he’s full of good ideas! (And we bet the nation’s unemployed are excited about competing with granny for a job.)

In his Op-ed piece, Chaffetz insists that it’s spending, not revenue, that is driving the federal deficit, and singles out Social Security, Medicare and Medicaid as the ominous-sounding “Big Three.” Oddly, he admits that government revenues are at “historic lows.” But he insists that — despite low revenues and a tax rate that would make Herbert Hoover blush — the government is NOT being “too generous to taxpayers.” We can fix our problems without asking anyone to pay for it. (Kinda like Bush’s Iraq War and prescription drug benefit!)

“Of course,” he writes, “the reaction from the Left has been predictable: we need more revenue from rich people and oil companies.” Well, yes, that would be nice. We’ve never figured out how oil companies and billionaires somehow got let off the hook on paying their fair share (except, of course, that their money eats politicians).

Conservatives are allergic to letting the Bush tax cuts expire. The word “tax” makes them feel as if they’re being attacked by bees. Yet they’re committed to eliminating the deficit. Since eliminating the federal government entirely would leave them all unemployed (like so many Americans), they must have some ideas on how to raise money. (Just never call it a tax.) So what do YOU think? What are some other creative ways the GOP can think of to reduce the deficit without killing the Bush tax cuts?

And now, check out this week’s featured video from the GOP TIME MACHINE:

WOMEN IN THE WORKPLACE!