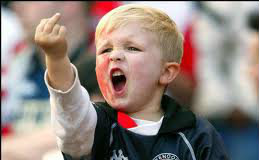 OK people. Hankies ready? California State Assemblyman Chris Norby wants you to shed a tear for all the boys in U.S. schools who, thanks to your government, have been forced to share all the toys with the girls.

We’re talking about Title IX of the 1972 Equal Opportunity in Education Act, which mandated gender equality in American schools. Although Title IX makes no mention of sports, it’s most famous for giving millions of American girls a chance to play on women’s teams. Norby doesn’t like that too much, whining that it was “never the intention” of Title IX “to attain equality by reducing opportunities for the men.”

Boo hoo. It’s perhaps not unusual that Norby, a conservative Republican and former volunteer for Barry Goldwater‘s 1964 presidential campaign, would take this position. What’s unusual is where he chose to do it: at a recent ceremony marking the 40th anniversary of Title IX and honoring women’s soccer champ Brandi Chastain.

Norby’s comments did succeed in reigniting online debate about whether Title IX is being appropriately applied in schools: whether boys’ sports are being unfairly short-changed or whether the girls’ sports are still a far cry from achieving equity.

An online forum is a great place for such debates. A ceremony honoring a highly accomplished beneficiary of the 40-year-old legislation, however, is not.

Given that the GOP today is frantically back-pedaling away from accusations of being anti-woman, we at the Lester & Charlie Institute of Forward Thinking would like to say it’s surprising that one of their own would make such a profoundly disrespectful statement in such an inappropriate context. But we can’t.

So we’re wondering: What’s next? Conservatives don’t seem to be in a hurry to shut up. So what’s the next boneheaded way some conservative will choose to recognize an important moment in American history? What do YOU think?

And now, check out this week’s featured video from the GOP TIME MACHINE:

WOMEN IN THE WORKPLACE!