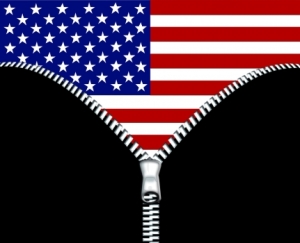 If you had the chance to “unzip” Mitt Romney, what do you think you might find?

We don’t mean that to sound as perverse as it does. We wonder if the same can be said for his wife, Ann Romney, who this week volunteered in a radio interview that her husband, when unzipped, was anything but stiff.

OK, so nobody wanted her to go there. (Though, seriously, is anyone surprised?) But the bigger issue, of course, is the major problem with Romney’s campaign. He comes across as a total freak. And he certainly didn’t help when he went on a different radio show last Wednesday and told what he thought was an hilarious story about how his father once closed down a car factory in Michigan. This is a man who could benefit from sensitivity training from a rock.

Mitt’s campaign is now so desperate to prove that he’s really just an ordinary guy that his aides went so far as to play a no-really-this-isn’t-ironic April Fool’s joke on him, inviting Mitt into a room where an audio recording suggests that a large and approving crowd awaits him… a room that turns out to be empty. Nobody wants you to read anything prescient into that. No, really, they don’t. Nothing to see here, people. Everyone move along.

As the likely GOP nominee, Romney faces a huge hurdle: How can he possibly prove to the masses that this multi-multi-millionaire resembles an ordinary American? Not that we here at the Lester & Charlie Institute of Forward Thinking are advancing the idea of electing anyone ordinary — quite the contrary, we’re more than happy to elect the extraordinary. But Mitt is so out of touch with the 99% that we really think he needs our help. Are you willing to pitch in? What do YOU think? What are some drastic things that Mitt Romney could do to prove to voters that he’s just like one of us?

And now, check out this week’s featured video from the GOP TIME MACHINE SERIES:

A Gun in Every Toy Box!

Are we now considering gender identity when we vote? Wouldn’t that be a step backward?
#adorable
#repost• @trustmeimasocialworker
Happy International Jazz Day!
“Maybe we weren't at the Last Supper, but we're certainly going to be at the next one.”~Bella Abzug
The Vice President and Speaker of the House of Representatives of the United States.